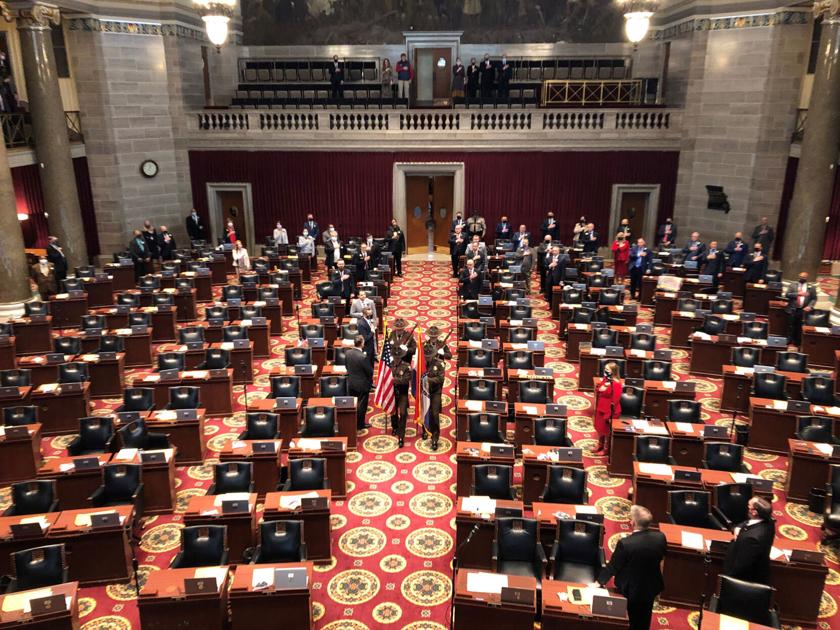 An online sales tax bill passed by the Senate in March was amended and adopted Wednesday by the House and is headed for conference, but a COVID-19 liability measure is on the ropes.

The House approved Senate Bill 153 in a 102-42 vote, but included numerous changes in bill, requiring it to be kicked back to the Senate, which passed it March 11 in a 28-4 tally.

“I believe we have constructed a package that is fair to all of the players involved. We have to be fair to out-of-state businesses because that’s what the Supreme Court said, and we want to help our in-state businesses to better compete,” said Rep. John Eggleston, R-Mayville, who sponsored the House’s version, House Bill 554, that was adopted by the House in a 96-59 vote on March 11.

“After a lot of negation,” Eggleston added, “I think we’re at a pretty good spot.”

Maybe not. The Senate wants more “negation” on the heavily amended bill.

SB 153 sponsor Sen. Andrew Koenig, R-Manchester, “moved that the Senate refuse to concur” with all the amendments and requested “the House to recede from its position or, failing to do so, grant the Senate a conference” to iron out differences.

SB 153 modifies the definition of “engaging in business activities within this state” to include all vendors with annual online sales of $100,000 or more and would require them to remit state and local sales taxes beginning Jan. 1, 2023.

Only Missouri and Florida have not adjusted tax laws in the wake of 2018’s South Dakota v. Wayfair Supreme Court ruling.

Florida lawmakers, however, adopted a “Wayfair tax” bill during their recently-concluded session that gained overwhelming support after incorporating “revenue-neutral” concepts that first appeared in Koenig’s SB 152 and Eggleston’s HB 554.

SB 153 would trim income taxes for lower-income families by establishing a Missouri Working Family Tax Credit, equal to 20% of the federal Earned Income Tax Credit, to be implemented when online sales tax collections begin in 2023.

SB 153’s fiscal note estimates collecting digital sales taxes would add up to $255 million to state coffers, including $26 million in increased revenues for local governments by 2028. With the “revenue-neutral” provision, state economists project a $185 million decline in state revenues by 2028.

While differences between online sales tax bills can be hammered out in the session’s waning hours, there may not be enough time for the House to approve a Senate-adopted COVID-19 liability bill.

The Senate passed SB 51 in a 20-13 vote on Feb. 23, but the measure has languished in the House since. After passing through one House committee on March 25, SB 51 was issued a “do not pass” verdict April 26 by the House Legislative Oversight Committee.

The panel agreed May 3 to reconsider, but has postponed three scheduled executive sessions, including one Tuesday, making it unlikely SB 51 can be adopted before Friday’s adjournment.

KANSAS CITY, MO (KCTV5) — The investigation into the police shooting of Malcolm Johnson has cleared another step. The case file for the Missouri Highway Patrol is now in Jefferson City, according … END_OF_DOCUMENT_TOKEN_TO_BE_REPLACED

Progress is slow on redeveloping the area around Capitol Avenue, but the revitalization of the Capital City’s historic corridor is starting to show the results of some much needed love.The East … END_OF_DOCUMENT_TOKEN_TO_BE_REPLACED

A new gaming venue in Jefferson City is hoping to create a safe, comfortable space for all local gamers to enjoy.Mimics JC held a soft opening last weekend at its new spot at 312 Lafayette St. as the … END_OF_DOCUMENT_TOKEN_TO_BE_REPLACED