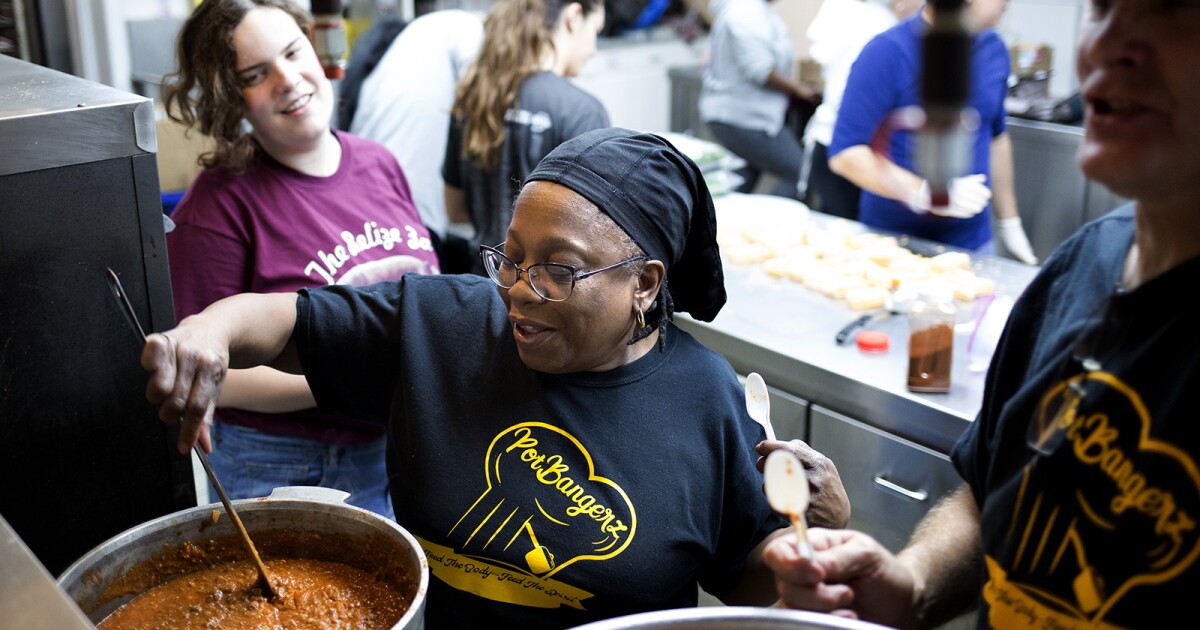 This interview will be on “St. Louis on the Air” over the noon hour Wednesday. This story will be updated after the show. You can listen live.

Cathy “MamaCat” Daniels discovered her love of the culinary arts in Florissant after her husband retired from the Navy.

“I just love food,” she said at a storytelling event in 2019. “I think it speaks a lot of languages. I think that it heals so much.”

But it wasn’t until after Michael Brown’s death in 2014 that Daniels became known within the St. Louis community for her cooking. She started out small — bringing snacks to protesters during the Ferguson uprising.

One day, she met some young activists who stayed protesting long after most others had gone home.

“They was like, ‘We ain’t going home until we get justice for Mike Brown.’ I’m like, ‘Yo, right on. How can I help y’all out? What can I do?’ A young man that I come to know as Dante says to me, ‘A little home-cooked meal won’t hurt nothing,’” Daniels said. “So I came back the next day with spaghetti, salad and garlic bread. … And this began a routine. Every day I get out of class, I go cook food, and I bring food out there, and me and my family — it’s my new family — we sat down and we ate.”

“We went down there [and] we begin to meet some of our unhoused neighbors — I call them my unhoused family now,” she said. “And we begin to build relationships.

“This is when my organization, Potbangerz: Feed the Body Mission was born,” Daniels continued. “Because if we’re gonna sit here and talk about Black Lives Matter, you better include every Black life. And I’m not talking about those of us that have four walls and a roof, but our family [for whom] the sky’s the roof, and there’s no walls to keep them warm at night.”

Now, Daniels plans to bring the Potbangerz mission to Jacksonville, Florida. She’ll join Wednesday’s St. Louis on the Air to discuss the move and reflect on her years serving the St. Louis community.

Have a question for Cathy “MamaCat” Daniels? Tweet us (@STLonAir), send an email to talk@stlpr.org or share your thoughts via our St. Louis on the Air Facebook group, and help inform our coverage.

“St. Louis on the Air” brings you the stories of St. Louis and the people who live, work and create in our region. The show is hosted by Sarah Fenske and produced by Alex Heuer, Emily Woodbury, Evie Hemphill and Lara Hamdan. The audio engineer is Aaron Doerr.

(The Center Square) – A year after Democrat auditor Nicole Galloway’s audit revealed an employee stole $316,887 from the city of Center in northeast Missouri, a follow-up report found only slight … END_OF_DOCUMENT_TOKEN_TO_BE_REPLACED

JEFFERSON CITY, Mo. – The average number of COVID-19 cases is at a seven-week low. The 7-day rolling average for cases in Missouri sits at 1,387; yesterday, it was 1,435. Exactly one month ago, the … END_OF_DOCUMENT_TOKEN_TO_BE_REPLACED

Chad Niezing of Manchester captured the title Sunday in the Missouri Mid-Amateur Championship at Jefferson City Country Club. Niezing opened with a 67 on Saturday before carding a 70 on Sunday to win … END_OF_DOCUMENT_TOKEN_TO_BE_REPLACED

Terri Blevins, 44, registers for help at an event sponsored by the city of St. Louis with the Metropolitan St. Louis Equal Housing and Opportunity Council to assist people with filing their … END_OF_DOCUMENT_TOKEN_TO_BE_REPLACED